Spirals and Labyrinths at Easter

This year our Easter experience emerged as an exploration of the spiral that is often seen to be at the source of all life, whether in the galaxies of space or the double helix of our DNA.

For Holy Week we helped build a labyrinth of stones in the Sanctuary space, led by Scott Taylor, our Director of Music and the Worship Arts here at First United Methodist Church of Waynesville, North Carolina. During the week, we and others walked the labyrinth, often carrying a pebble 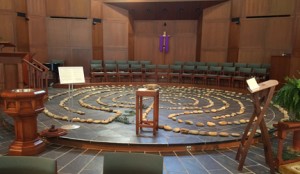 we placed among the stones as we walked. Palm branches lay at its entrance to lead us from Palm Sunday to Good Friday. The walk of the labyrinth has become very popular in recent years, probably as a way of reclaiming the spiral of creative power at the heart of life in a world of so much destruction, disruption, and anger. A small journal was placed on a lectern so we could leave our thoughts behind for others.

On Saturday the stones were removed and Sylvia’s new art pieces were placed in the sanctuary. They consisted of two 14-foot panels of sumptuous fabric glowing against he cherry walls. The paraments on the pulpit and lectern, as well as runners on the altar table, echoed their vibrant, almost iridescent gold. Here is what she said about them:

These two panels, with echoes of the theme in the paraments, are a visual meditation on the gathering and dispersing of life energy. This energy, which some of us call God, is most readily recognized by us when condensed into a finite, earthly manifestation, such as a human life, a tree, or a flower. On a grander scale we recognize light, love, music, and the cosmos as other showings. These mysteries are both metaphor and reality at the same time.

The Righteous Branch (The “Gathering” on the left)

In the story we call “The Stump of Jesse” (Isaiah 11) we trace the genealogy from Jesse through several generations to culminate in the birth of Jesus. In this panel I have attempted to use this story as an example of the gathering creative life energy until it becomes manifest as a new life. The dark form at the bottom of the panel represents this “stump” which will grow through succeeding generations as it flows upward. The spiral, found throughout creation, represents the coming together of this flow of energy as the birth of Jesus.

The Flower Full Blown (The “Dispersing” on the right)

Here the life-giving energy flows out of the dark cave of death/renewal toward the spiral of dispersion. The life force which became manifest in the birth of a child has grown and matured. The flower has become full blown.

It is once again returned to its source, but not lost or dissipated. It is in this ebb and flow that we participate, both in our lives and in our faith.

The great cosmic manifestation of this gathering and dispersing is the birth and resurrection of Jesus, the Christ. Each panel moves from a place of darkness through successive places of light. The blue and white crosses we observe in our central window above them come together and dissolve as a motif in the panels. The flames in the window become sparks given off by the suggested intense heat and light in the spirals. The pieced background refers to our Appalachian “crazy quilts” where bits of precious fabrics were used to form a new whole.

As Sylvia worked on these pieces over the past months, we talked often about what to name this “life force,” which we have tried to capture with words like “God,” “Allah,” “Creator,” and the like. But it is always a reality beyond naming, as we learn in the story of Moses at the burning bush. Moreover, it is bound into the core of our very existence, not as isolated individuals but as creatures within a lineage transmitted by DNA as well as the collective DNA of our libraries, customs, language, habits, and manners. So the DNA fragments came to be a kind of linkage of incarnation, the bridge between the material and the spiritual, the mundane and the transcendent.

This is a precious linkage, as our ethical disputes over gene research, preservation of memory, and respect for deep traditions tell us. But there is always a power transcending as well as working through that which binds us together over time and space. I hope that these pieces from her mind and hand will continue to arouse wonder and conversation as we walk the labyrinth of life in the years ahead. 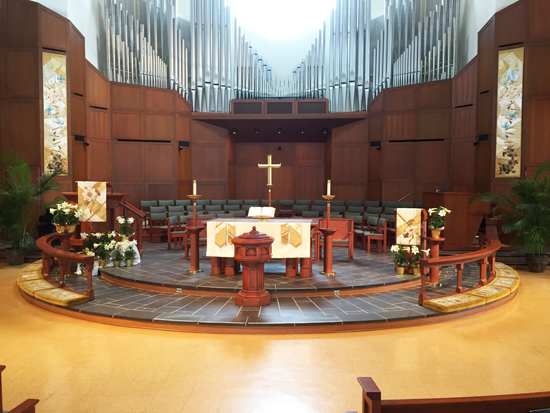 4 Responses to Spirals and Labyrinths at Easter