A stunning museum of American art in the Ozarks of northwestern Arkansas? Well, get used to it. We tried to visit the Crystal Bridges Museum of American Art in 2014 but the great ice storm Titan ditched (so to speak) our plans. This year, under gray skies but no ice, we made it. You must go. The life-long dream of Alice Walton, of Walmart lineage, it is an accomplishment of architecture, art, ecology, and education nestled in a ravine in her family’s home of Bentonville, Arkansas, where Walmart is still headquartered amid an exploding metropolis of subsidiary businesses and industries.

My attention was first caught by the 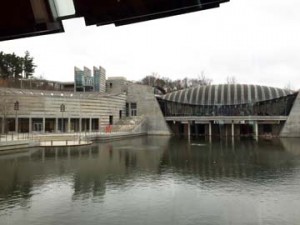 architectural work of Moshe Safdie, the world-renowned architect who had also designed the buildings at Hebrew College that came to share the hill with Andover Newton in my final years there. Drawing on the architectural heritage of Frank Lloyd Wright and his student Fay Jones (Thorncrown Chapel and Cooper Memorial Chapel are nearby), Shafdie conceived of a set of structures that would bridge the little creek in Alice Walton’s ravine. Local woods were laminated into the beams supporting their roofs, with glass walls erasing the barrier between inside and outside spaces.

Great care was given to preserving as many trees as possible, including two tulip trees that were renamed Thelma and Louise, because they teeter at the edge of one of the buildings. Other woods were incorporated into the furnishings. The grounds are still being 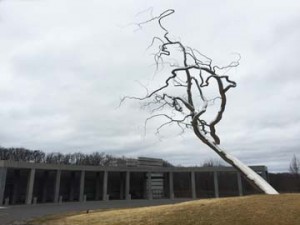 developed, but they contain an array of sculptures, including a “Dendrite” tree by Roxy Paine, versions of which we had seen at the Museum of Modern Art in Fort Worth and in Raleigh at the North Caroline Museum of Art. The “Maelstrom,” by Alice Aycock, emerged as Sylvia’s favorite. She definitely did not like the enormous arachnid that hovers over the entrance foyer. 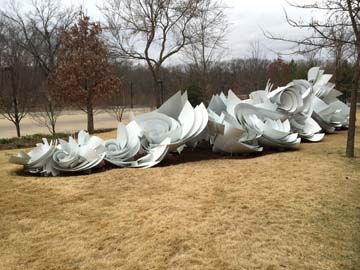 Nestled into the woods adjacent to the main buildings is a home built by Frank Lloyd Wright. We would not have seen it in 2014. It was recently moved piece by piece from New Jersey, where it was endangered by recurrent floods, to Crystal Bridges, affirming the American architectural tradition represented locally by the work of Fay Jones. While we could feel some of the “tiny house” ethos

of our present time, we could also see elements of light, honesty of materials, and alignment with the land that had inspired us in building our own home, which has room for our “stuff” as well.

The inside spaces display an extensive representation of works from the earliest American painters to contemporary installations. They include many works by women (Mary Cassat) as well racial or ethnic minorities (Jacob Lawrence, John Biggers). Most works have a description that tells you how the work fits into the history as well as contemporary context of its creation. The wooden floors made viewing a pleasure rather than a backache.

Fittingly for us, a special exhibition of “Border Cantos,” based on materials and photographs of the Mexican-US border barriers was installed in the exhibition gallery. It concludes with a wall of post-it notes from immigrants to the US from all over the world.

And there were families, children and young people everywhere. Because it’s FREE! Yes, you have already paid for it. A million people a year are now visiting it, in spite of its (for coastalites) remote location. As they wander its buildings and lands, we can only hope they are imbibing the artistic heritage that its constantly expanding, unfolding, and daring new things. And as, they say in Hamilton, immigrants are always making it happen in new ways.

And now, a word about the food. It is delectable, presentable, down-homey with a flare, and reasonably priced. What more can you ask for? Not to mention the room overlooking the pond, wooden beams arching overhead, and the golden heart warming the space above… Well, we were grateful for the experience. Sometimes great wealth does good things. You all go, now, hear? 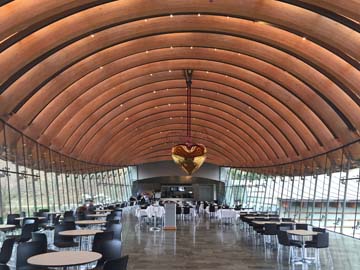