We are all trying to make our way through the images of inhuman warfare in Ukraine, grief-stricken by the loss not only of lives but of dreams of stability and peace in a globalized world. In this blurry confusion I have found myself realizing that my own country stands on shaky moral ground. Blinded by the victory over the evils of fascism in the Second World War, we took on wars around the world in defense of the civilization of democracy we claimed to espouse—in Korea, Vietnam, Iraq, and Afghanistan. And then there were the clandestine overthrows of governments in Chile, Iran, Guatemala, and other places. Our claims to defend national sovereignty or self-determination ring hollow in the face of this history, not to mention the repercussions of slavery and genocide that haunt us to this day. In the decades of this American “crusade” to make the world safe for democracy, America’s churches have often wedded themselves to this expression of American imperial ambition to support a kind of American “Christendom.”

At the same time I have been very aware that the Russian invasion of Ukraine presents a crisis to the Orthodox communion of churches as Moscow takes on a war against Kyiv. (For a helpful introduction to this see John Burgess’s critical analysis in The Christian Century this week.) We thus have two colliding versions of Christendom: the Evangelical wedding with American nationalism and the Orthodox vision of a “Russkii Mir” (Russian Peace/World) uniting all the Slavic peoples under Moscow’s rule. On each side, we have contests between supporters of this imperial model of Christendom and those who seek a critical engagement of churches in open republics of democratic governance.

In this midst of these reflections, my friend John de Gruchy sent me a link to the statement of Orthodox theologians and leaders on “A Declaration on the “Russian World” (Russkii Mir) Teaching” that lays out the biblical and theological basis for opposing this imperial version of Christendom threatening the world’s peace. Here is the core of their statement:

“The principle of the ethnic organization of the Church was condemned at the Council of Constantinople in 1872. The false teaching of ethno-phyletism is the basis for “Russian world” ideology. If we hold such false principles as valid, then the Orthodox Church ceases to be the Church of the Gospel of Jesus Christ, the Apostles, the Nicene-Constantinopolitan Creed, the Ecumenical Councils, and the Fathers of the Church. Unity becomes intrinsically impossible.
“Therefore, we reject the “Russian world” heresy and the shameful actions of the Government of Russia in unleashing war against Ukraine which flows from this vile and indefensible teaching with the connivance of the Russian Orthodox Church, as profoundly un-Orthodox, un-Christian and against humanity, which is called to be “justified… illumined… and washed in the Name of our Lord Jesus Christ and by the Spirit of God” (Baptismal Rite).”

The war in Ukraine is not only a struggle over autocracy versus democracy (and not simply over the value of national sovereignty). It is a struggle over the degree to which Christian churches will align themselves with nationalisms and imperial versions of “Christendom.” It is a struggle to affirm and continually refine the alternative view of the critical engagement between church and public order, of the Christian case for democratic, republican orders of government, and the integrity of the image of God in each person. This is what I am thinking about as I see the faces of the beautiful people of Ukraine, of the mangled bodies of Russian soldiers, of the wreckage surrounding the ancient churches of Ukraine. The Russian word “mir” means both “peace” and “world.” What we mean by “world” and “peace” hangs in the balance in this war.

I close with a picture of the famous Madonna of Kyiv, which dates from the 12th century and which now hangs (safely, we hope) in Moscow. Even as it testifies to the unity of the  Orthodox churches, it also becomes a prize in their warfare. Above all, it reminds us of the loving heart of God that underlies God’s image in us all. 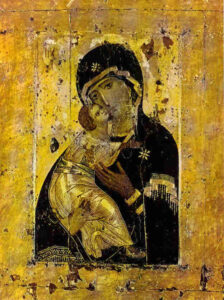 This entry was posted in Ethics, Public Life and tagged Orthodox Church, Ukraine. Bookmark the permalink.

4 Responses to A Collision of Christendoms