Howard Thurman entered my consciousness sometime in the 1960s, as I was taking up my graduate studies at Yale. As Dean of the Chapel at Boston University (1953-65), he was already being quoted in sermons, and his poems and prayers were appearing on bulletins and newsletters. I was immediately struck by his eloquent voice as an almost mystical thinker who was also engaged in the ferment of the Civil Rights movement. I felt a strong resonance with this message, since I was aware that my temperament and gifts led me to work on the deep cultural symbols that must legitimate lasting social change. But it was only later, when Luther Smith, a leading interpreter of Thurman’s life and work as well as my good friend and colleague at Candler School of Theology, spoke about Thurman’s singularity and depth on a regular basis, that I began to appreciate the profound message he had brought into religious life and its public engagements.

Last year, as we hunkered down into our individual inward journeys during the first phase of the pandemic, we were also being taken on an inward journey as a people into the often repressed memory of slavery and racism in the heart of American life. The explosion in the streets was also a deep earthquake in the self-understanding of people in all walks of life. I was drawn back to Thurman and began to read his autobiography, With Head and Heart, and when I finished that I took up, with renewed interest, Luther’s deeply insightful exploration of his thought and work in Howard Thurman: Mystic as Prophet. In it, Luther points out how Thurman’s mystical sense of deep unity with all of creation and with all of humanity lay at the core of the vision of reconciled community that motivated and oriented him to the work of overcoming the deep injustice and alienation at the core of our racial divisions. It is this unity of mystical depth and public engagement that has also energized the work of Richard Rohr, OFM, who turns frequently to Thurman’s writings for inspiration

As I was digging deeper into Thurman’s remarkable life and vision, I got a call from a team at Boston University School of Theology asking if I might consider constructing some furniture they could use in BU’s Marsh Chapel, Thurman’s home during my graduate school years. I had already made a table and lectern for the School in 2012. It had found so much use, including in preaching classes, that the lectern had mysteriously (!) broken. We agreed that I would repair it (a life-time warranty…) in time for the hoped-for resumption of classes.

Marsh Chapel, built in 1949, is a stately gothic edifice that embodies what the general public thinks “church” should be: a rectangular space, stained glass windows, timbered ceiling, the audience (yes, audience) seated in pews facing forward to hear and observe the sacred words and actions at the front of the space. But there was a problem, the team  pointed out, both spiritual and physical. How could a person in a wheelchair possibly get to the elevated pulpit to preach with the same authority as a standing person? And how could they find a way to “gather at table” in a fellowship of equality on the same level? How could the space created by a table and lectern be portable to other locations? How could the temple once again be a tabernacle among the people? (That last one is my question!)

As I thought about the demands of a worship space accommodating persons in wheelchairs, I recalled Thurman’s most famous work, Jesus and the Disinherited. How fitting that we would be talking about constructing worship furniture that would accommodate this group of “disinherited” bearers of God’s witness! Moreover, that these demands would lead us to emphasize how the worshiping community gathers around a common table that receives them all equally is yet another powerful version of Thurman’s vision.

All of this worship should be open to the many expressions of faith that actually exist in their community—something dear to Thurman’s heart. And there was one more question: what symbolism might shape any inlay in these pieces that would evoke attention to the diversity of faith expressions in the community  as well as the unity of the God of all creation?

Regardless of the various degrees of conscious remembrance of Thurman that still exist among the folks at BU, my own crafting of these pieces is imbued with what I know of his spirit. As I thought about symbols embedded in his own vision, I called Luther for a long conversation about Thurman. In it, he suggested that I look at the symbolism of the oak tree as embodying something central to his life. It is to the oak tree near his boyhood home in Daytona Beach, Florida, that the young Howard would retreat in order to claim his fundamental rootedness in the divine creativity and love. It is an image that recurred in his meditations throughout his life. And so, I have put an inlay of an oak tree on the lectern tablet from which future seminarians will preach in Howard Thurman’s school and chapel.

We live in a time when we are trying to resurrect the image of God in trees, birds, soil, and even human beings. The image of Howard Thurman’s patient teaching and praying in the shade of his beloved oak can help us stay centered in our task. I’ll report back to you as these pieces emerge. Here’s the lectern. 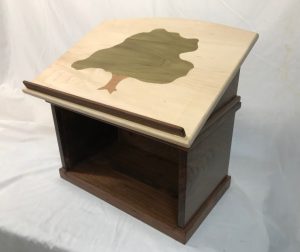 This entry was posted in Poetry and Songs, Woodworking, Worship and Spirituality. Bookmark the permalink.

3 Responses to Under Howard Thurman’s Tree