I am happy to announce that Wipf and Stock Publishers have brought out a handsome reprint of my 1987 book God’s Federal Republic: Reconstructing our Governing Symbol. It is doubly attractive because they chose, without any suggestion from us(!), to use a detail from Sylvia’s wonderful textile hanging, “Bright Morning Star,” on the cover.

The cover description states: “Biblical religion is driven by a longing for God’s ultimate order of justice and peace. Most of this longing is steeped in the patriarchal symbols of 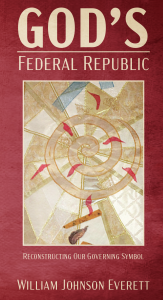 kingship, monarchs, lords, fathers, and princes. This symbolism came to bind European churches to the legitimation of monarchies and empires for over a millennium. The American and now global experiment separated the churches, with their kingdom language, from government dedicated to democratic, republican, and federal constitutional order. Religious efforts to guide and critique government have subsequently suffered from political irrelevance or theocratic nationalism. Everett lifts up the biblical and classical origins of our present republican experiment to construct a theological position and religious symbolism that can imaginatively engage our present public life with a contemporary language permeated with a transcendent vision.”

The gist of the matter is that Christian worship and ethical practice need to speak in the language of democratic, federal, republican governance in order to be faithful to the ancient struggle for justice and planetary well-being. This book was my effort to enunciate a theological project that has permeated my work ever since. I am grateful to Wipf and Stock for bringing it before the public once again.

A reprint, however, is not merely a work of memory and nostalgia. It needs to speak to a continuing question. Amidst the ongoing questions of how American “Evangelical” Christians could support a US President who thinks and acts like a despot or unhinged monarch, I think this book offers some guidance. The support of so many Bible-based Christians for a despot is mirrored every Sunday in the worship language of monarchical and often arbitrary rule rooted in most of our traditional images of God. While we profess to be committed to democracy and republican governance, we are, as I said in a Christian Century article in 1990, “Sunday Monarchists.” The problem we face is theological at its core and requires the long, slow cultural change in worship that underlies lasting social change.

I will not live to see how this long effort unfolds, but I hope that this question and this preliminary argument will remain in the public conversation a little longer, inviting others to take up the work. You can find it at Wipf and Stock’s website or your other usual sources.

This entry was posted in Ethics, Public Life, Worship and Spirituality. Bookmark the permalink.