We just returned from two weeks in Scotland. Many months ago we planned to visit the Island of Iona to participate in a week-long retreat at the historic Abbey. We then added on a brief stay in Edinburgh to taste its long history and present spirit. Every year, thousands of people make a pilgrimage, or at least a tourist stop, at the little island adjacent to the larger island of Mull, gateway 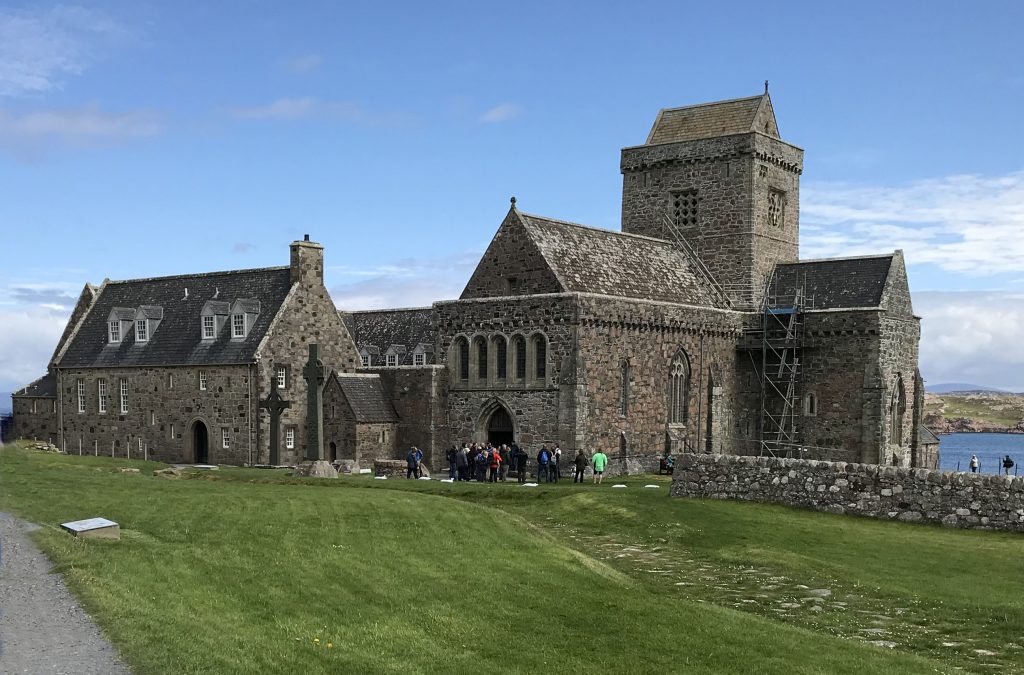 to the inner Hebrides off the west coast of Scotland. Claimed for a missionary monastery in 563 AD by St. Columba, of Ireland, it has long been revered, even in ruins, as the cradle of Christianity in the land of the Picts and the Scots. Over the last century, much of the Abbey and its buildings has been restored. Programs of spiritual renewal and ecological awareness are conducted by the Iona Community within its precincts and beyond. Sheep and Highland cattle browse the clipped fields while the bones of centuries of monks, warriors, kings, fishermen, and farmers sleep beneath the sod.

While we had simply wanted to soak up any spirits these grounds might yield, our retreat agenda was suddenly reshaped by the decision to buy a house in town to sustain us in this next lap of our life’s journey. The time on Iona became a chance to suspend our daily chores in order to assimilate this profound movement from our beloved dream home in the mountains to a smaller house in town that was being resurrected by a caring and competent couple whose “fixer-upper” work seems as much a ministry as a profession. Our own life transition became an unexpected part of our group’s conversation as the week progressed amidst internet connections that were, let’s say, somewhat medieval.

So Iona became for us a hinge between our personal past and future, just as it has been the hinge between Scotland’s ancient past and its Christian era. The stone walls of the old Abbey where we prayed, listened, and shared our deeper thoughts contained a darkness like the fears and mysteries encasing us, but the sea outside was brilliant in the summer sun, the sheep and cows like the still patience of God. The stones and beams arching over us became a sheltering presence re-arranged to argue for a future only dimly augured by the past.

a place of devotion

Not drawn from the sky of speculation

But from the broken stones that lie about

detritus of an unknown hand.

And so we move from our beloved home built

pure amidst the mountain brambles and the trees

To claim a domicile from the bones of long-neglected rooms

left desolate by loss of hope, of means, of caring hand.

All one life in the builder’s hands

Seeking habitations for our souls.

But Scotland was not finished with us. For four days the long “Royal mile” of Edinburgh, sloping from the old town of castle and Cathedral to the royal palace of Holyrood and the new Parliament building, was yet another metaphor of our transition in life. At the high 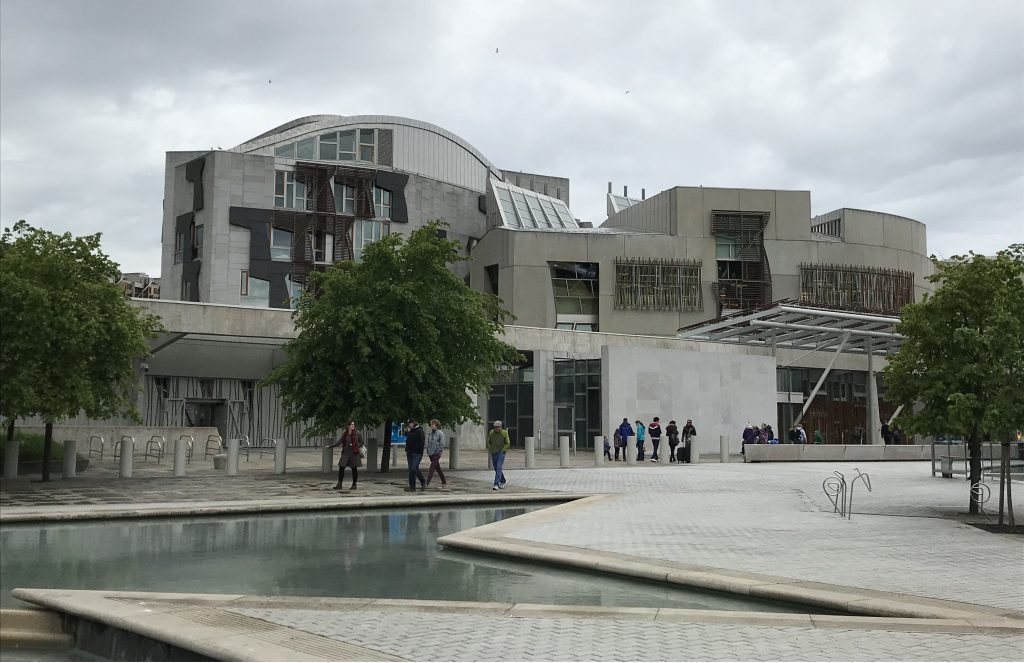 end, we worshipped in contemporary yet formal language at St. Giles Cathedral and heard a lovely concert of contemporary music by the visiting choir of Myers Park United Methodist Church of Charlotte (how strange to come so far to hear our neighbors!). At the bottom of the road was the wholly original doorway to the future, Scotland’s new Parliament building, completed in 1999. Here was openness to the future as well as voices of the past inscribed on outside walls for 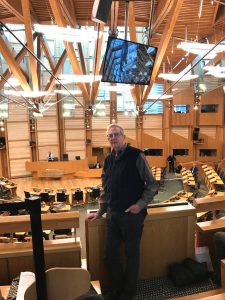 passersby to contemplate. We were able to get tickets to attend a session of Parliament to hear debate about how to respond if or when the UK leaves the European Union. Scotland stands at yet another threshold of possibilities, with dangers on either side, trusting only in the power of mutual persuasion in the face of grim necessities of trade, immigration, climate change, and new expressions of ancient rivalries.

It was not the trip we expected. It was a chance to pause between past and future, to sense the anxiety as well as the liberation of change. I’ll try to share some relevant thoughts about this in the months ahead.

3 Responses to Transitions in Scotland