Last weekend we took part in the ninth Lake Junaluska Interfaith Peace Conference. The political convulsions of the last few years led to the theme of “Meeting the Other — Can We Talk?” Keynote speakers drawing on traditions in Judaism, Christianity, and Islam laid out ways to approach this theme, while the music of Abraham Jam, an interfaith trio, wove through the entire proceedings with spirit, laughter, and vision. Workshops and visits to services in a synagogue and a mosque in Asheville completed the four-day event. I took away two reflections from this invigorating experience.

From Traditions to Visions

First, what we call “interfaith” seems to be moving from the juxtaposition of representatives from (in our case) the three Abrahamic traditions to being an exploration of ways these historic traditions can constitute a variegated global community of hope and affirmation. We are moving from an emphasis on traditions, with the implication that they are set in stone, to one of visions of a possible future together on this planet. How is this occurring?

The respectful affirmation of people from 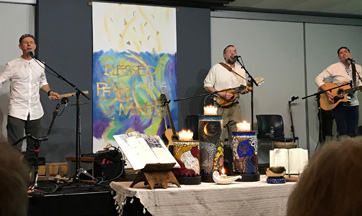 Abraham Jam in Song at the Peace Conference

other traditions already is rooted in core convictions of a oneness in God and in God’s creation, in commitment to a unifying though mysterious spirit at work among us, and a conviction that this spirit seeks the reconciliation of all things. These gatherings seeking to explore pathways to reconciliation are already forging a set of affirmations, beliefs, rituals, and artistic expressions that are rooted in these traditions even as they seek to go beyond them.

I am not speaking here of some kind of religious Esperanto that can simply translate the received dogmas, practices, and symbols of these traditions. Rather, there is a genuine transformation of these traditions, even while affirming the ancestries in which they stand. Awareness of the ecological unity of our planet within an expanding universe already begins to create a new stage on which people seek to grasp and act in accordance with the ultimate energies holding them in life with all beings. This activity gives rise to new prayers, new songs, new rituals, new conversations, and new sensibilities. Indeed, the symbolic actions in which we try to express and create these emerging aspirations, because they cannot simply name them literally, constitute elements of some kind of deep cultic activity, whether it is the sounding of a brass bowl, the lighting of a candle, or the circle of hand-in-hand.

These cultic elements, like any religious tradition, then long for cultural expressions in which they can send down roots to nourish actual human communities. In our conference together we are gestating cultic companions to an emerging global culture. We face steep opposition to this effort both within us and among us. It is in the deep conflicts between local loyalties and emerging global bonds that we find the intense warfare that is tearing apart the fragile civic orders of our own time. The “other” has yet to become the “partner,” the stranger has yet to become a friend. The interfaith peace conference is one way of trying to move to a higher ground of commonality in the midst of our diversity.

From Conversation to Argument and Negotiation

My second observation reminds me once again that the path from stranger to friend leads first through conversation. “Can we talk?” asked the Conference. I have spent a lot of time in the past fifteen years cultivating the art of circle conversations They have constituted core practices in restorative justice programs like JustPeace in the United Methodist Church or in my own congregation’s embrace of people of all gender identities and sexual orientations. These practices continue to be emphasized in our peace conferences. They are the indispensable beginning of efforts to repair our civic order. However, it was also apparent to me that conversation alone cannot repair the public realms so savaged by recent attacks by despots and oligarchs.

Circles of conversation must lead to development of the arts of argument and negotiation if we are to restore our public life. Argument requires the ability to articulate a position, whether it is a factual claim, a policy proposal, a judgment or a law, and then to defend it with appeals to common convictions and understandings. Argument depends on a world of common sense and of scientific validation that is being assaulted by authoritarians of all stripes. Without it there can be no work of persuasion. Every difference is reduced to the assertion of force. In resorting to authoritarian bullying rather than reasonable argument, we give up the fundamental assumption of republican governance.

Yet even argument is not enough. Public life is an engagement with negotiation among competing interests. Indeed, a frank recognition that we have interests and the ability to define and understand them clearly is necessary to the public negotiation that constitutes a democratic order. Whether this involves the work of compromise, in which we have to sort out lesser from greater priorities, or imaginative solutions that transcend original positions in an argument, we must develop arts of negotiation that secure a world in which all of us can continue to exist and even flourish together. This is, of course, the work of diplomacy, another recent casualty of the march toward coercion in the midst of fear and threat.

My old friend Russell Pregeant led a workshop at the Conference around his recent book, For the Healing of the Nation: A Biblical Vision. Its title draws on the vision of the tree “whose leaves are for the healing of the nations” in Revelations 21-22. This image inspired a tapestry by Sylvia many years ago and we brought it to the workshop. It remains in my mind as think about how the interfaith work of peacebuilding requires more than the juxtaposition of traditions. It requires conversations that lead to coherent argumentation and responsible negotiation. Even more, it requires imagination that leads us into a future we do not simply build from our past. There is a spirit of creativity that presides over our future work. It is a work of seeing the stranger, of listening, and speaking from our own hearts in conversation, argument, and negotiation. This is the work by which we seek to live into that more perfect republic grounded in God. 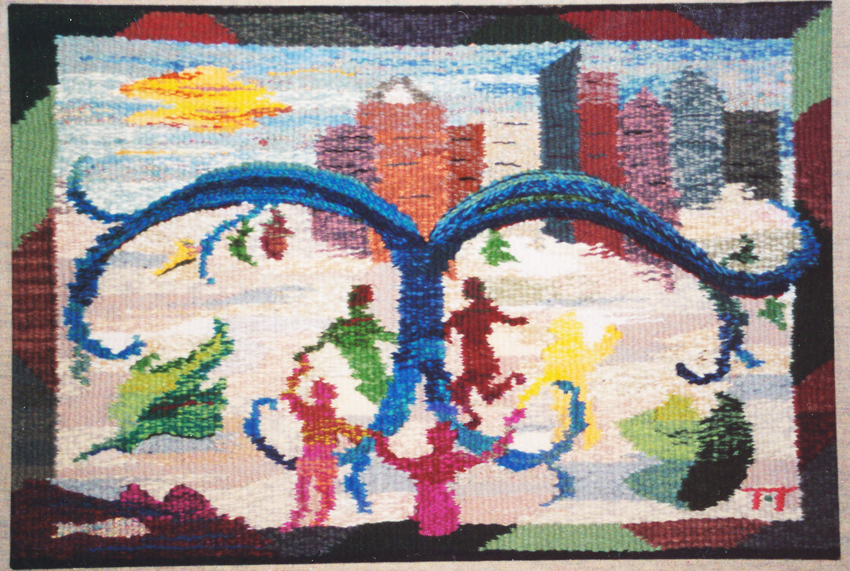 “For the Healing of the Nations” — Sylvia Everett