One of the things that has fueled our long interest in visiting Cyprus is the collection of glass and pottery that my grandparents brought back with them and that has been in my family for three generations now. Ten of the more significant pieces have been in Emory University’s Carlos Museum for the past fifteen years. Indeed, Cyprus has been the home to workers of clay for over five thousand years. The ancient Greeks and Romans were only discovering a much older culture of artisanry when they arrived with their mosaics and glass technologies. In our museum visits we came across two figures that have come to represent these earliest works, which are embedded in the fertility cults of the ancient Mediterranean.

The cross-shaped figure is from the Calcolithic period (3000-2500 BC). In other versions of this figure what appear to be the arms here are represented by another figure. The two crossed figures (one male, one female) form a fertility symbol – an even more ancient predecessor of the Christian symbol. The replica we bought is about four inches high.

The other, more mysterious figure seems to be a version of the fertility goddess known widely as Astarte and whom the Greeks called Aphrodite. Indeed, Cyprus seems to have been the center of this fertility cult, since Aphrodite was also known as “Cypris.” Here, however, rather than simply being a nude female figure, she appears as a kind of Madonna. Her nose, in the form of a pinched beak, remains enigmatic. The rings may be a way of representing an elaborate hairdo or jewelry. This ceramic form dates from around 1300 BC.

What strikes us is how “modern” these figures seem. In a sense, this is not surprising, since the “modern” in art was fueled in part by Picasso’s discovery of primitive African masks. Nevertheless, in cutting away frills and ornamentation, they return us to the essentials not only of an image but of the realities of life, reproduction, love, hope, and death. Indeed, the Madonna figure was often found in tombs, perhaps giving the dead a hope of rebirth into a new life. 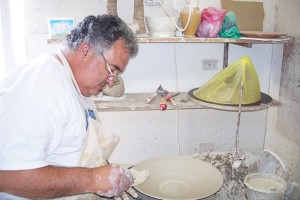 We found these replicas in the state-sponsored handicrafts store in Larnaca, but we also saw them in museums. As we wandered through some of Larnaca’s old streets we came across a closed shop whose display window contained the Madonna figure. Intrigued, we came back another day to discover that the ceramicist, Efthymios Symeou, creates these pieces for Cyprus’s museums. Originally from Famagusta, he was forced to leave in turmoil of the ethnic division of the island that I spoke of in my last report. He and his Swedish-born wife and son generously allowed us to visit their studio and speak with them about our reasons for coming to Cyprus as well as about their own exquisite work.

The displacement of artisans like Efthymious appeared in other settings as well. We had been keeping our eye open for old copper work that we presumed must exist in the birthplace of copper mining, but we had seen none. On our last day in Nicosia we visited the island’s most famous bookstore, Moufflon’s, not far from the Cyprus Museum. (The moufflon is a species of sheep found only on Cyprus.) At Moufflon’s we spoke with Ruth Keshishian, who expressed considerable interest in our Cyprus pictures, declaring that there is great interest in these old pictures and reports, especially in light of the enormous disruptions of the past fifty years. “Maybe you should write up a book on it,” she said with a twinkle, not knowing that the last such glint led to Red Clay, Blood River! She said she would be glad to help, so stay posted.

As an aside, we mentioned the difficulty in finding any old copper work. “Ah, yes,” she replied. “They used to line the old street in Nicosia that became the Green Line. They were mostly driven 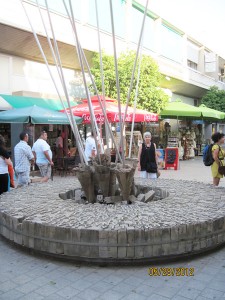 out and their work has ceased. There is, however, a tiny little shop where you can get things right at the Ledra crossing point.” So we walked back to the Ledra, which has become a pedestrian mall, Starbucks and McDonalds included, leading from the old Venetian wall to the city center. At the crossing there is a sculpture depicting the chaos of identity caused by the division and a sign reading “The last divided national capital in Europe.” Just around the corner, tucked away so we didn’t see it on our first visit to the crossing, was a copper curio shop, whose owner brought down an inventory of copper as we stood in the center of his tiny emporium. We came away happily with an elegant old pitcher and a copper plate stamped on the back in Turkish Arabic with the name of the maker and the original owner. 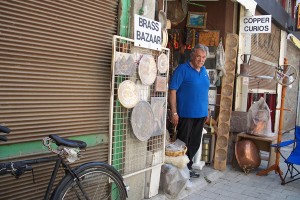 So our Cyprus journey ended with memories and mementos of my family’s years at the world’s oldest copper mine as well as tangible pieces of the artisanship that had been producing works of art for more than five thousand years. In being aware of the memories they contain I also came back with the acute knowledge of how much has been lost, not only of my own family’s very recent history but of generations long removed. We return to a country both absorbed in its own very recent history but also consumed by the media trivia that drives out memory and the commitment to its continual reconstruction for the sake of bringing people into amity on this little island we call earth.