Reconciling Past and Future in Cyprus

Our American friend Pippa Vanderstar had put us in touch with Avo Mangoian, one of Cyprus’s leading photographers, who has a store in the old city of Nicosia not far from the Cyprus Mail offices. Avo had helped Pippa with photos connected to her doctoral thesis. The day after visiting the mine we found Avo at his store and sat down to share the old photos. When we reached some picture postcards my grandparents had kept from those days he said, “That’s one my father took.” In short order he found its original in his carefully archived collection of old prints across two generations. The sense of walking in the footsteps of previous generations is always palpable in such ancient lands, but these old photographs focused these feelings on our own lives over three generations.

Avo’s family had also been instrumental in making a family property in the buffer zone a few blocks away available for the “Association for Historical Dialogue and Research.” (AHDR) Built by his family shortly after World War II, the “Mangoian Building”  had been ravaged by the civil conflict in 1974 and been abandoned until

its renovation by the AHDR in 2007. Named the “Home for Cooperation,” it conducts programs to foster greater cooperation between the Turkish and Greek populations of Cyprus. It is situated across from the once-magnificent Ledra Palace, the center of Cyprus’s post-World War II diplomatic life. Behind the H4C, as it is known, lies the moat of the old Venetian walls – the physical symbol of a divided Cyprus.

Let me insert just a word about the roots of the present division, which are more complex than I can convey here. Cyprus has always been a valuable “possession” of every civilization that sought a central position in the Mediterranean. It has been dominated by Greek, Egyptian (the Ptolomaic dynasty), Roman, French, Venetian, Ottoman, and British empires. In 1960, it became, for the first time, an independent republic, neither united to Greece nor to Turkey. However, certain agreements permitted Greece, Turkey, or Britain to intervene if the republic was turned from its independent constitutional course.  However, conflict between the Turkish and Greek populations continued. The military junta that took power in Greece in the late 1960s overthrew the Cypriot government in 1974, thus triggering an invasion of Turkish forces seeking to stabilize the situation and protect the Turkish community. Within the ensuing flood of refugees the UN established the famous Green Line dividing north and south and a buffer zone until a final peace settlement could be achieved. It has been thirty-eight years since then and there is still no resolution. We are approaching the time-tested forty years when unjust and illegitimate regimes fail. Will we see a change in the next few years? No one knows. For a quick introduction to the problem read James Ker-Lindsay, The Cyprus Problem: What Everyone Needs to Know (Oxford University Press, 2011).

Now, back to our day in the old city of Nicosia, also called Lefkosia. With Avo’s directions and words of introduction in hand we walked along the razor-wired boundary atop the old city’s 16th century walls of fortification and past abandoned 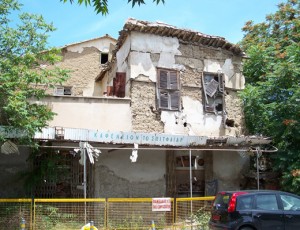 buildings marking the Green Line to a checkpoint where we were waved on by soldiers into the buffer zone. The Home houses a pleasant café where we had a light lunch while waiting to arrange a meeting with Kyriakos Pachoulides, president of the AHDR, which oversees the Home’s work. Having found a time to meet later in the day, we spent most of the afternoon visiting museums and shops in the old city. I’ll report on that later.

Pachoulides met us later at the H4C during a break from a workshop. His face, movements, and hair all spoke of an energy and enthusiasm that contrasted sharply with the signs of decay all around us. We immediately turned to discussion of the work of the AHDR, summarized in its mission statement “to defend and promote productive dialogue and research into history and history teaching and, in this way, to enhance critical thinking, democratic citizenship, stability and peace in Cyprus.” Being situated in the buffer zone (often called “the dead zone”), it is 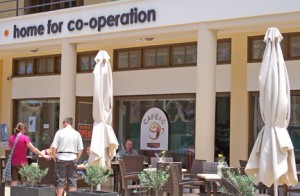 The Home for Cooperation

accessible to Turkish as well as Greek Cypriots. Under the watchful eye of the UN peacekeepers, it is supported by the Council of Europe, grants from Norway, Sweden, and other countries, as well as the USAID and many independent organizations interested in the work of reconciliation in Cyprus. Because the division is rooted in so many centuries of hostility, suspicion, and mistrust, the AHDR works at the deep cultural level, trying to reshape people’s historical narratives and perspectives on conflict and cooperation.

For me, this educational and cultural work lies alongside the work of “cult,” manifested in the worship life of religious traditions. However, given the way that institutional religion (Muslim and Christian) lies at the core of the dysfunctional hostilities, it seems unlikely that either church or mosque can or will play a positive role in this process. At least I saw no evidence of it in my brief stay. But then again, I can’t read Greek or Turkish, so my view is a very superficial one.

Kyriakos, now accompanied by a colleague, lit up when I pulled out by photo album, especially one picture of the families after church at the Skouriotissa Church. He explained that they are working on the memories of miners and their families, especially the children, as a part of Cyprus’s common history. Photos like this would be a wonderful part of expanding this common memory. This little album had quite unexpectedly become the key to conversation everywhere we went in a land hungry for its own history, for re-visioning it, and claiming it in a new way in order to move toward greater justice and peace. Indeed, as Michael Lapsley has said in South Africa, there is no reconciliation without the healing of memory. Here was an echo of his own work at the Institute for the Healing of Memories.

Cyprus is only fifty miles wide and a hundred and twenty miles long. Could not the very unity of the island, I asked, be a source of common memory? Couldn’t the ecological dimensions of the people’s common existence on the island be a source of unity? They both expressed deep pessimism about this possibility. “If a town on one side, with an adequate fire fighting crew, saw a fire just across the Green Line consuming a village without such a service, they would do nothing. That is how deep the estrangement goes.” Of course, there are secret forms of cooperation to keep the sewage system going in Nicosia, but that is about all. Whether cooperation about our human waste can extend to cooperation for the ecological integrity of the island remains a question for me. 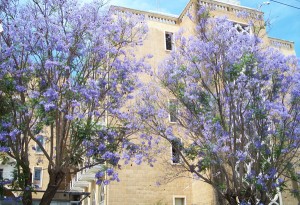 As we neared the end of our conversation, Kyriakos hailed a passing woman riding a bike, exclaiming, “Hey, we have another North Carolinian here!” Sure enough, the only American we met in our entire stay was a Fulbright professor from UNC Chapel Hill. Her residence, in the Fulbright House, was across the street. A touch of home in the buffer zone.

As we left, waving to the soldiers, we were both chastened by the enormity of the task of reconciliation in Cyprus but also encouraged by the energy and vision of those who will continue to try to create a Cyprus united in justice and peace. I continue to believe that the unity of the island’s life will overcome the enmity of humans.

4 Responses to Reconciling Past and Future in Cyprus