Readers of these postings will remember that I have spent many months recently helping to lead efforts by members of our church and community to examine our racist history and search for ways to remember it fully and repair the damage of past generations. Rightful remembrance is the first step toward the healing we all so desperately need if we are to flourish in this land.

Scott Taylor is our church’s Director of Music and the Worship Arts and is presently studying toward his M. Div. degree at Candler School of Theology. In connection with his Biblical studies he has written this powerful remembrance about his own origins on a farm west of Winston Salem, North Carolina. We welcome your comments as we struggle with this difficult issue.

“What have you done?” Yahweh asked.  “Listen to the sound of your brother’s blood, crying out to me from the ground.”  Genesis 4:10 (Jerusalem Bible)

I grew up on Taylor Road, a two-mile long country lane on my family’s third generation farm.  The farm sits on the banks of the Yadkin River in the North Carolina Piedmont and the road separates the river’s floodplain from the bluffs, rolling red clay hills ideal for growing tobacco and corn.  I remember my childhood on this land with nostalgia: my brothers and I played in the river, fished in ponds, built forts out of fallen poplar trees, and frequently camped out under a wide sky.  Back then, there were only a few houses on Taylor Road and all were relatively modest, with one exception.  At the far end, about a mile from my house, stood a large white house, Greek revival architecture, completed in 1837.  We called it the Glenn house.  I understood that the Glenn family had owned the farmland a generation or so before my family settled, that they had operated a river ferry, and nothing more.

Last year, while doing some research for a church confirmation lesson, I stumbled on the “Tyre Glenn Papers” at Duke University’s Rubenstein Library.  As I read the online description of these 19th century documents, I learned that Tyre Glenn, 1800-1875, was the first owner of the house at the end of my road.  He was a successful businessperson and cultural icon in the region.  He was a founding member of the Enon Baptist Church, where my mother is buried.  He built this large and impressive home where he welcomed notable guests including NC Governor Zebulon Vance.  He was wealthy – and his wealth came from his work as a slave trader.  At its height, his plantation, known as Glennwood, included 6000 acres and claimed 362 souls in chattel slavery.  This makes Glennwood one of the largest North Carolina plantations west of the capital in Raleigh. 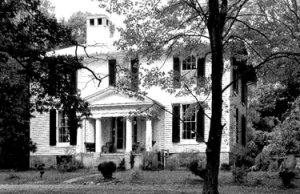 I grew up believing a version of history that aims to put some moral distance between the South’s poor mountain farms and the large opulent plantations near the coast.  While there may be truth to this, as most slaves were nearer to the coast, in the case of Taylor Road, I fear it was nothing more than a tale of moral convenience.  Since my discovery, shadows have darkened the nostalgia of my childhood.  Even though their story was lost to the bad memory of my forebears, these red clay hills now cry out with the blood of enslaved men, women, and children.

I am not yet sure what to make of this glaring omission or how to respond.  I have found some footing, however, in a familiar and much-repeated phrase from the Old Testament and in a recent poem by U.S. poet laureate, Natasha Trethewey.  From the former, the justice-bending arc of Israel’s history often impinges on the telling of unsettling stories about slavery, defeat, and failure.  Scripture frequently calls readers to “remember that you were once slaves in Egypt.”

This phrase, or a close variant, shows up in sundry theological and political contexts from Sabbath observance (Deuteronomy 5:15) to militaristic strength (Deuteronomy 7:17-18).  The biblical scribes, writing during or after exile in Babylon, likely felt that this memory of slavery and deliverance might bring a measure of comfort and hope to a people dispersed and living in captivity.  More than that, scribes inserted this bad, traumatic memory into law codes, covenant passages, and rituals like Passover to compel a people to re-form their national identity around a kind of freedom not built on oppressive power structures (Exodus 23:9; Deuteronomy 15:15).  Only through the memory of slavery can a people claim liberation.

Why then are people plagued with such a bad memory?  Natasha Trethewey’s poem Incident recalls a horrific event from her childhood, the KKK burning a cross at her bi-racial family’s Mississippi home.  The significance of the event is marked by the first and last lines of the poem, “We tell the story every year.”  Inherent in this line, as well as in the biblical passages noted above, is the understanding that people are woefully forgetful.  As Trethewey puts it, some people would prefer to say, “Nothing really happened.”  This is a familiar lie.  When seven police officers in Minneapolis stood idly by and watched as a fellow officer murdered George Floyd with his kneecap, we heard this lie.  When hundreds of police officers in Washington D.C. stood idly by and watched a murderous group of rioters storm the Capital, we heard this lie.  When I learned that the house at the end of my road was the home of a large Southern plantation, I realized that I had been listening to this lie for a long time.

Equally important as the stories we remember are the ones we forget.  While the stories we silence may offer momentary shelter from the painful truth of our past, they ultimately hold us hostage to the lie, “Nothing really happened.”  Something did happen.  Really!  The importance of a good, true memory cannot be overstated.  We must listen to the Old Testament and never forget slavery.  Though my story is extraordinary, at least to me, it is not unique.  Every acre of this American land cries out with the blood of our brothers and sisters.  We must do all we can to remember them for it is that memory that compels us in our journey toward liberty and justice for all.

3 Responses to Bad Memories — Guest Posting by Scott A. Taylor