He ran for Peddie School

He ran for Lehigh

His heart so big

his legs so quick

he ran so free

that when the yoke of later years

descended on his shoulders

he still could hear the song inside

I still can run

I still can feel the wind. 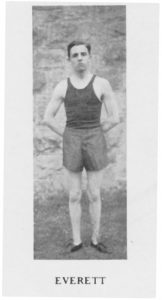 The pandemic has given us all what my friend John de Gruchy calls a “monastic moment” when we can take some time for the work of the soul and the memory. It comes with the additional onus on us oldsters to stay out of harm’s way by a more assiduous isolation in the household. For those of us with yards and workshops, it has meant well-tended flowers and greenery as well as workshops in greater order than they ever experienced in our busy years. It has also given me time to begin the tedious but eye-opening work of sorting out the archives of a life. And not only my life, but the lives of my parents, grandparents and even more distant ancestors. Maybe I’ll share the auto-tour diaries of my great-grandfather George Lains (1918-1935) if this goes on much longer.

Among the artifacts of family memory are my father’s high school and college yearbooks. Thanks to digital technology we can finally scan the meaningful parts and send the heavy tomes to their eternal reward. It is not news that my father was a runner in high school and college. But as I read through these distant words and looked at pictures of his teammates and his own youthful self, I also heard some other themes drawn from his later years and so I share those with you here. The race and the run as a metaphor for life is well-known to readers of the New Testament. (Read St. Paul’s verses in I Corinthians 9:24, 2 Timothy 4:7, Hebrews 12:1, Philippians 3:12-16.). They remind us of the effort and perseverance that life demands of us if we are to live it well, but they can also open us to the life-giving wind, air, and exhilaration of movement that are life itself. May we run and not be weary. Stay with it. Let’s break the ribbon together.

This entry was posted in Personal Events, Poetry and Songs. Bookmark the permalink.