Blessed Be the Bond

I am happy to announce the publication of the third edition of my book Blessed Be the Bond: Christian Perspectives on Marriage and Family. First published by Fortress Press in 1985, it was reprinted in 1989 by University Press of America. In 2010 Professor 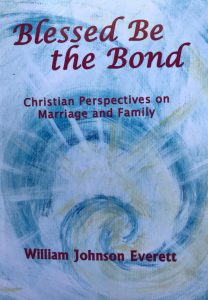 Richard Hunt, of Fuller Theological School, encouraged me to prepare an edition for ministers and students that he had worked with in recent years. This second edition circulated as an unpublished file until I decided, last year, to bring out a fresh edition, fully reformatted, that would make it available to a wider audience.

On the one hand, the social relationships of marriage and family seem to have changed rapidly in the past few decades, especially with regard to same-sex marriage, but family structures have always been varied and constantly changing under the impact of economic, political, religious, and other social forces. On the other hand, the powerful psychological motives and perennial religious dimensions of marriage endure as indelible aspects of the human condition—what we have also called “human nature.” Because of this, I have found that the framework I proposed originally still offers helpful insights into the sociological, psychological, and religious dimensions of this complex feature of human life.

The book emerged in the wake of my own experience in marriage, family, divorce, and new marriage, so it has an intensity and focus borne of those rich and difficult times. The basic relationship models of hierarchy, equality and organic complementarity still pervade marital relationships. We still experience a complex interaction between the four “subjects” of marriage and family that I identified then: person, couple, family, and household. This sociological ensemble still finds rich connections to classic Christian symbols of sacrament, vocation, covenant, and communion. In a short compass, this book tries to show how these elements are woven together in various people, churches, and cultures, offering models for all of us to consider and even incorporate into our own lives.

This book arose as a companion to my work on public life, God’s Federal Republic, which was reprinted last year by Wipf and Stock Publishers. Both of them fed into the project of work, family and faith that Sylvia and I developed in the 1980s as the OIKOS Project. They lie at the core of much of the research, writing, and teaching that I pursued in the ensuing years.

The revolution in printing and publication that has occurred in the past few years makes it possible for people like me to offer easy access to their work—an intellectual legacy, if you will. If you’re lucky enough to have a wife who is an artist and a daughter expert in graphic arts, you can put out a pretty nice cover as well! Kudos go to Sylvia and Aneliese for their work on this and other books. Because of the low cost of these volumes, a wide audience can take advantage of the presence of these reflections for years to come.

As always, if you take a peek inside, I’m interested in your own reflections, comments, or questions. May we all continue to find many blessings in the bonds that give us life.

This entry was posted in Ethics, On Writing and tagged Blessed Be the Bond, marriage and family. Bookmark the permalink.

1 Response to Blessed Be the Bond