Annunciation. That is what we call the angel Gabriel’s message to the virgin Mary in Luke’s Gospel story (Luke 1:26-38). In Matthew’s version, it is only related that “an angel” came to Joseph to tell him that Mary would bear a son, not by Joseph’s act but by the work of the Holy Spirit. All of this was to fulfill Isaiah’s

prophecy that “”a young woman shall conceive and bear a son and shall call his name Immanuel.” (Isaiah 7:14)

Embellished in poems, liturgies, stories, songs, paintings and sculptures for centuries since, it is also an ethical and theological stumbling block for many, including me. It is yet another image of a male sovereign violating the integrity of a woman for his own purposes. The violations of biological science are merely additional burdens the story must bear. And yet it has walked the corridors of my imagination all these years, thanks not only to Botticelli and the Renaissance masters, but also to this stunning sculpture by my friend Charles McCollough, which was presented to me on my retirement from Andover Newton Theological School. It is only now, however, that I have finally made a proper pedestal for it, bringing her gasp and her stunned hand closer to my eyes, lifted up, so to speak, on angels’ wings.

And now it continues to provoke me. Separated out from the gender politics and scientific critique, it speaks to an even more universal religious question: How am I to be a bearer of the divine creativity in this world? The Annunciation tells us that we will be taken wholly by surprise by God’s answer to this question. It will stop our words in our throats. It will cause us to clutch our gut. It will drive us to our knees. We will not understand it until we search our distant past and attend on our distant future. And even then our understanding of the meaning of our life’s work is stunted by the limits of our minds and hearts. 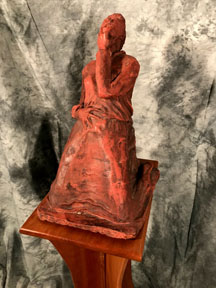 Gabriel was not offering a proposal or a contract. He was simply announcing. It was left to Mary only to ponder it in her heart, to wonder, to “bear” this news until it issued in painful birth and painful death. And so we are offered a glimpse into our own bearing of whatever mysterious vocation is ours. The faith for which Mary is honored is a form of knowledge in only the sketchiest sense—the knowledge that she has been called into a mystery. The model of faith she gives us is more simply to live with and into whatever working of God is going on in our life and that our life participates in a wider work that brings the creation closer to its ultimate fullness and beauty. And so we gasp, and clutch, and kneel in pain. Waiting. Hoping. Becoming the beauty the world longs for.

This entry was posted in Arts, Worship and Spirituality and tagged Annunciation, Charles McCollough. Bookmark the permalink.