The Heritage of Mata Ortiz

Las Cruces is in America’s Borderland with Mexico. We are staying in fact in Old Mesilla, where the Gadsden Purchase was signed that defined the geographical border between the two countries. But the cultural border is a matter of shading. Thanks to the guidance of our friends Rich and Naida we just spent a few days south of the border in Casas Grandes, Chihuahua, Mexico. We drove through the ugly steel barrier wall west of El Paso, where Rich navigated the bureaucratic intricacies of taking a car into Mexico. In an instant we passed from a world of English speakers flavored with Spanish to one of Spanish tinged with English.

More importantly, we were in the Chihuahua Desert of mesquite, yucca, sandy soil, and vestigial grasses. This is the true “wall” separating the peoples of the north and south. Thousands of human remains have bleached out in these searing lands. Our car cruised along with the occasional truck and SUV shielded from the struggle of life around us. Just for the record, the Mexican semi-trailers were as polite and professional as any truckers in the States, signaling when it was safe to pass and observing all the “señales” (not the “seniles,” as Rich joked).

Nuevo Casas Grandes lies in the foothills of the Sierre Madre Orientale, Mexico’s southern extension of the Rockies. The original “Great Houses” lie a few miles west, in the village of Paquimè, site of the UNESCO World Heritage Archaeological Zone. Anchored by a fine museum, the archaeological park gives 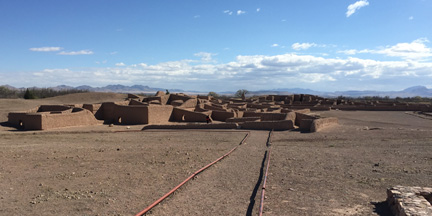 us a physical sense of the former 1700-room pueblo nestled on a knoll overlooking the river valley below. From about 1000 to 1340 AD several thousands of people lived here, farming and trading with groups to the south and north. The low walls reconstructed on the old foundations tell of multi-storey dwellings, hot and cold running water (yes!), ritual offerings (birds, it seems), and everyday life. Their life together ended catastrophically with an invasion and total destruction of the city. 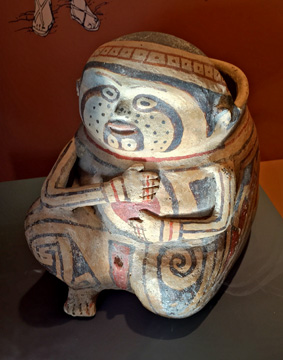 the lower layers of the site they came across marvelous pottery adorned with sophisticated imagery. It was these pots and designs that inspired a local potter, Juan Quezada, to begin creating pottery in the nearby village of Mata Ortiz. Entranced, collectors from near and far have made it one of the most popular pieces of local craft in the Southwest. The next day, we headed out of Casas Grandes for this famous little pottery center.

On the way, Rich took us on a slight detour through the town of Colonia Juarez, settled by Mormon refugees from Utah in the late 19th century. Seemingly air-lifted out of any mid-western town, the two-storey homes filled in a grid of neat streets in this tidy agricultural community. Most amazingly, a gleaming white temple overlooked the town, the 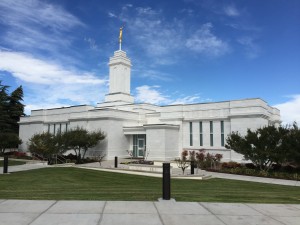 angel Moroni blowing his golden horn on its pinnacle. Yes, folks, Salt Lake City has a satellite in rural Mexico amongst the indigenous mestizo Catholicism all around it.

A few miles away the Hacienda de San Diego of Luis Tarrazas (1829-1923) broods in dereliction like a Western movie set. Certainly the richest man in Chihuahua in his day, Tarrazas built this enormous palace, with extensive housing for laborers, animals, and supplies, at the turn of the 19th century. Today, a few families live in portions of the old buildings, machinery lies among the ruined walls, and some livestock munch placidly amidst the ruins. This was clearly the “Giant” of its day, now passed into legend and, for some, nostalgia, though its culture was overturned by the Mexican Revolution that sought to destroy the old hacienda system. I could feel that there were many voices murmuring in the weeds and broken doors, whispering to me about the overthrow of the oppressive wealthy. The breezes are still taking away their words like seeds across the lands, across the borders. 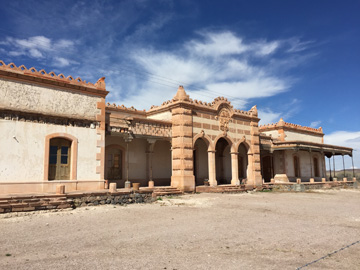 A railroad snaked its way into the tiny town of Mata Ortiz and left a depot that is now the town’s art co-op, displaying some of its famous pots. It seemed we were the only tourists that day, so people stopped their pickups in the streets and hailed us from a roadside stand, inviting us to see their pots, buy some at a price you couldn’t find up north. A little girl, accompanied by her mother and grandmother, held a little pot in her hand, inviting us to buy it. Her sweet, inquisitive face is still haunting me.

holding it the way

her little town is held

of the Sierra Madre

shining in her eyes.

Her dusty town is built

of lines and circles

wrested from a broken heritage 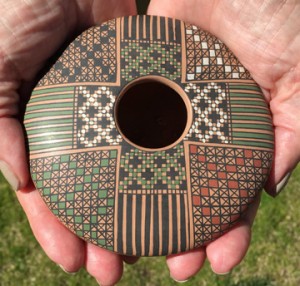 Around the corner someone was renovating an adobe home in veneration of Frida Kahlo, whose life story and work have become ever more lustrous over the years. Its chromium blue walls shouted down the dirt street to a home where we actually bought a beautiful pot by the nephew of Juan Quezada. The purchase of a beautiful work of art in the home of the maker is now almost an act of religious veneration for a world of work and life ground down by global technology. If you want to know more about Mata Ortiz, you can download for free a Kindl publication, Mata Ortiz Pottery Buyer’s Guide: The Earth’s Bounty into your Home’s Beauty, by Philip Stover, with complete information on getting there. Ignore all walls and visit this remarkable village!

As if to complete a circle of pots from the past to the present, Rich and Naida took us up into the Sierra Madre to the Cueva de la Olla (“Cave of the Jar”). Located at the end of a jarring dirt trail well off the highway, the cueva is overseen today by Señor Lamiro from 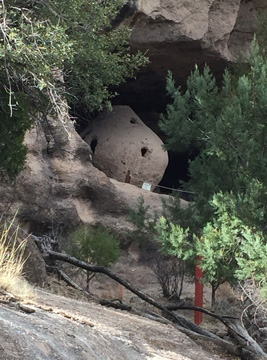 his little visitor’s cabin at the foot of a rocky canyon whose rim has been carved by wind and rain into camels, eagles, and faces. In an overhang above us the ancient pueblo dwellers had constructed a huge storage container sheltered from the elements and most marauders of the time. Here we had, once again, not the eyes, not the faces, not the voices of the human beings who dwelled here, but only the work of their hands in mud, straw, and stone.

It was a day that asked us, How do we take possession of our past to make a pot to hold our future? How do hands and minds and voices still construct a world at home with nature and the human beings that give a shape to love? We now have some beautiful pots that invite us to these questions. The next day we swept back across the desert to the ugly testimonies of walls that seek to silence such a conversation. 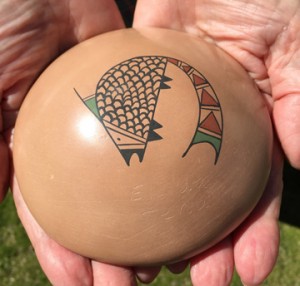 1 Response to The Heritage of Mata Ortiz