The Hidden Life of Trees

Posted on January 7, 2017 by William Everett

As I walk, sit, work, live, and sleep in one of the world’s greatest hardwood forests, I am constantly aware of the world of trees around me. Cherry, walnut, ash, tulip poplar, locust, oak, maple, hickory, and many other species unknown to me send out their greenery, lose their branches, glow in autumn color, bend beneath the winter snow, and shower us with seeds and pollen when the sun is high in summer.

But I am not as conscious of the forest, of the whole organic system, that finds evidence in all these trees we name as Grandfather, Grandmother, and Old Ash. It is this life of the forest that has been opened up for me by Peter Wohlleben in his little book The Hidden Life of Trees: What They Feel, How They Communicate (tr. Jane Billinghurst; Greystone Books, 2016). Wohlleben (fittingly, his name means good-life, even luxury) is a forester who cares for a special forest preserve in 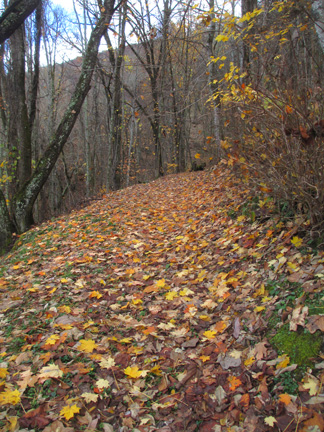 the mountains south of Cologne (Köln), Germany. Out of his years of practical experience and the scientific research informing him, he has put together an evocative portrayal of how forests actually live and seek to survive.

From our individualistic and commercial worldview we see forests as a collection of trees, some of which are good for lumber (that’s my first interest) and others for less “valuable” purposes, like nuts, fruits, and animal habitat. Even now, loggers are taking out old tulip poplars from a parcel next to us on Wolfpen Mountain. Their trunks are trimmed and lashed to trucks bound for the sawmill. Just the other day I purchased some poplar boards for a project I am doing. This is the commercial transaction through which we view the forest.

But Wohlleben leads us into a forest of communication, where trees send out pheromones to alert others of insect attacks and diseases. Immense ganglia of fungi transmit messages among the trees about their stresses and reserves. Through intertwined roots, parent trees feed their offspring and friends on the forest floor. With their branches they restrict the youngsters’ growth to force them to build sturdy stems until they have their day in the sun. The soil itself is part of the life of the trees and they, through leaf mulch, rain diversion, and symbiotic life forms in their branches, nourish the earth.

We don’t sense this because the time of a tree is five, six, seven times that of a human. Even when trees break off at their base, new sprouts carry on their life. The basswood that fell along the trail a few years ago now has new shoots springing from its side. I see this all the time on “dead” logs in the forest around me. The forest invites me to extend my sense of time as well as of my connection to the life around me and in me.

Wohlleben’s empathic knowledge of his forest reminds me of the philosophies of organicism that were well developed by Henri Bergson and Alfred North Whitehead at the turn of the last century. Whitehead’s theory of “internal relations” among the “actual occasions” constituting existence made a great impact on me earlier, as it did on all the proponents of a process philosophy and theology.

Germans especially have had a long romance with the forest primeval. Most of us were raised on stories by the Brothers Grimm and others that draw on the mystery of the woods’ rich depth and darkness. But there is also an abundance of research now to show us how the forest is a living organism, how it is a part of our lungs, of our medicinal armament, and, in its patient growth and dying, a resonant dimension of our spirits as well. Its welfare, with the oxygen it provides and the water it retains and purifies, is the measuring stick of our own welfare – our “Wohl-leben”— on this planet.

This entry was posted in Ecology and tagged Peter Wohlleben. Bookmark the permalink.

3 Responses to The Hidden Life of Trees