Climate Change and the Work of Peace

The day after Donald Trump was elected President of the United States, we gathered at Lake Junaluska for our seventh annual Interfaith Peace Conference. Our theme this year was “The Climate Crisis and Peace.” Planning had begun over a year ago, with little awareness of the storm of fear, despair and anger in which we would meet. With ice caps melting, sea level rising, droughts, fires, and 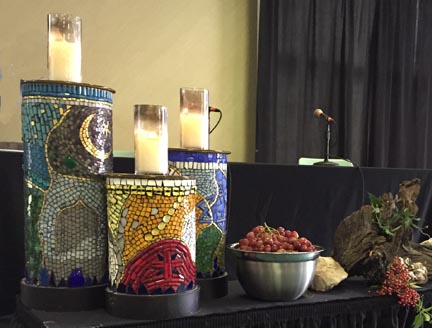 intense storms increasing their tempo, we met with an intensity and purpose that began to heal the trauma we and the world have suffered. I want to give you a sense of that meeting.

Norman Wirzba, working out of his family’s farming traditions in western Alberta, drew us back to the soil itself and the agrarian roots of our civilization and our religious heritage. For him, God is a gardener of this creation who calls us to join in the work of living as responsible earthlings. The table at which we gather to partake of the bounty of the land is the center of our worship life, something I might add, that all three Abrahamic faiths have in common, whether in Passover, Eucharist, or Ramadan. For me, this dramatically positions the round table of circle conversation and reconciliation firmly in its ecological basis. There can be no separation of reconciliation among humans from reconciliation with the earth. This has to be the lodestar that keeps us moving as we negotiate the chaos of climate change denial and belligerent exclusion that confronts us in the years ahead.

David Seidenberg, who refreshingly confessed that he had never been with so many Methodists in his life, let alone in the American South, drew us back to the riches of the Kabbalah and its cosmology of a world that is the emanating presence of God. The whole world is the “image of God” and each of us is a fragment of the original vessel of the world. God’s own power in this world is one of hesed —covenant faithfulness. With Norman Wirzba, he emphasized the importance of our Sabbath traditions as the core of our religious response to ecological crisis. In the Sabbath, we honor God’s work of Creation, remove ourselves from the feverish and often idolatrous effort to dominate it (including the animals), and engage in an awe-filled moment of beholding the beauty of God’s image in this world.

As he too drew on the stories of Genesis and the Creation, I was more vividly struck than ever that the original sin outside the garden —the murder of Abel by his brother Cain — was as least as important as the sexual messages with which we have burdened our understanding of the banishment from the Garden. In that murder we have the struggle between nomadic forest dwellers, dependent on meat and fruits, and town dwellers gathered in permanent settlements by their fields of wheat and other crops. And we have not resolved this conflict in all the intervening years. How can we farm in such a way as to preserve the precious soil, water, and air on which we depend? How can we eat meat without the industrialization of slaughter on which we mindlessly depend for high-protein, high fat diets? How can we live more in a harmony with the land, its creatures, and its fruits, without slaughtering each other in war and ecological degradation?

Rabia Terri Harris, who returned to the Conference after giving her insightful observations on ecological theology in the previous year, invoked the image of the whirling dervishes of Sufi tradition, whose prayerful movements remind us that we are all ones who “wait at the door of God” and remember that “wherever you turn, there is the face of God” (Qu’ran 2:115). What we have done, however, is try to create a world in which wherever we turn we see the face and mark of human action. We are at heart idolators who seek security in our own efforts. As we confront the destructive impact of a climate change that we have precipitated with our industrial civilization, she encouraged us to have faith in the “Not I,” the One whose invisible governance of the whole creation revealed the compassion, mercy, and love at the heart of existence. It is with this One that we are to enter into the conversation of a new covenant restoration and reclaim our proper “deputyship” in the work of Creation. We must remember that the forgiveness of God is always present for a new beginning.

With these theological affirmations ringing in our ears and resounding in our hearts we heard Jacqueline Patterson present, in word and image, the work of people in many regions of the country who are linking the work of ecological repair to the work of justice among those most injured by climate change — those whose poverty and race puts them next to the dumps, refineries, and other polluting industries on which our industrial order depends. If you didn’t know it before, the ravages of flood, fire, and famine caused by global warming are one of the great injustices of our time. An effective response to it is a great work of peace-building and restoration.

We clearly face a concerted effort to roll back the progress we have made for racial, gender, and ecological justice. Our own efforts to work with the Creator who seeks flourishing for all creatures need to rest on the confidence that we are part of that “Great Work” and that we are undergirded by the Love that sustains us all. Each of us needs to find where we can engage in that work and stay connected with others who are joined in that work as well, whatever their political expression, beliefs, or appearance. As we care for the earth, so we care for each other. Peace. Pass it on.

2 Responses to Climate Change and the Work of Peace