The Gift of Mother Emanuel

Last week Sylvia and I went on a long-planned visit to Charleston, South Carolina, a beautiful and historic city we had not seen in twenty-five years. Founded in 1680, its protected harbor made it one of the most important and prosperous cities of colonial America. Much of its wealth was built up on the backs of African slaves who raised the rice, indigo, tobacco, and cotton that flooded from its port. It was where the American Civil War began, not merely with the shots fired at Fort Sumter out in the harbor, but with the State’s “Declaration of the Causes of Secession” on December 20, 1860. The cause? That “an increasing hostility on the part of the non-slaveholding States to the Institution

of Slavery has led to a disregard of their obligations” to enforce the original Constitutional requirement to return fugitive slaves to their masters. It was by far the bloodiest conflict of our history. Even today, some people, like our guide on a carriage ride, claim that the war was not fought over slavery. It was.

On June 17 of this year a lone young White man posted pictures of himself on the internet defending the honor of the flag of the Confederate States of America and then slipped into a prayer meeting at Emanuel African Methodist Episcopal Church. After receiving their hospitality and listening to their prayers and conversation about the Bible, he shot and killed nine of the congregants, including their distinguished Pastor. He was soon caught and at his arraignment some of the family of those he had killed declared that though they would grieve for their loved ones for the rest of their lives, the love of Christ constrained them to forgive him.

Emanuel is the “Mother Church” for African-American Christians not only in Charleston but far beyond its boundaries throughout the South. It was the church of Denmark Vesey, a carpenter who bought his own freedom with a lottery ticket, and who helped found the church. Vesey led a failed rebellion and escape plan in 1822 and was executed along with thirty-four others. The congregation survived its subsequent banning and destruction of its building, continuing its work as a beacon of hope after the Civil War.

The faith and grace manifested by its members after this assault brought President Obama to a special memorial service where he led the congregation in singing “Amazing Grace” in the face of the still-raging racism and callous political indifference to gun violence that still infect our national life.

It was to this church that we went simply to utter a prayer and to feel the grace of this sacred place. Outside, a spontaneous shrine of flowers and mementos stood at the foot of the entrance stairs, flanked by announcement boards, one of which said simply “Thank You.” We found a church member on the lower floor who graciously led us up to the sanctuary where a group of young people was finishing up a visit. “Sit down, make yourself at home. Stay as long as you like. Thank you for coming.” he said quietly.

When the young people had left, a woman of the congregation came over to us and greeted us softly and graciously. We said we had simply come to say a prayer for her congregation. “Thank you. We need your prayers.” And we talked a little bit about the beautiful sanctuary. At the front are two large paintings of the Crucifixion and Resurrection. “We don’t know who painted them. They were 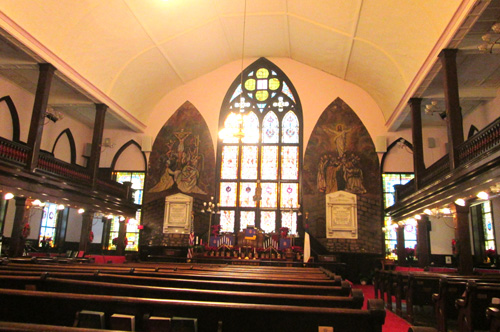 done at the end of the nineteenth century. Some people complain that the Jesus is too white, but we aren’t going to change them now.” It’s all right, we said, “he looks sort of Palestinian now.” She smiled. We talked a little more. Then she added, “You can go downstairs, too. That’s where the shooting was.” We said that it would be too painful. She seemed to understand and thanked us for coming, adding that we could sit and meditate as long as we wanted to.

We did sit, meditate, and gaze at the frescoes. We could feel the love and care that had gone into this building over all the years. We tried to grasp the years of living into the impossible calling of forgiveness and healing that had yielded their moment of grace in the midst of their suffering.

It was the most precious Christmas gift I can remember. Thank you, Mother Emanuel. We will not forget.

4 Responses to The Gift of Mother Emanuel