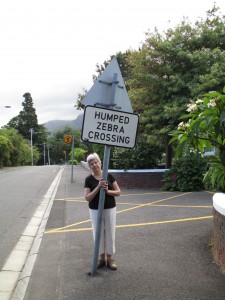 After a five year absence we have returned to our beloved Cape Town, land of the humped zebra. No it’s not a cross between a dromedary and a zebra. But it does cause a real bump in the road if you hit it. And if you don’t obey the lights at the “robot” at the intersection, you can get in a nasty accident. Of course, there are more easily understood signs, like “Penguin Crossing” and “Do not feed the Baboons” on the road to Cape Point. Welcome to the linguistic hodgepodge of British English, Afrikaans, Xhosa, and whatever else gets thrown in the colloquial stew. At least this version of English doesn’t contain the “clicks” that the “Bantu” languages coming south inherited from the indigenous San (Bushmen) language, which may be the oldest language in the world. The San are also, I hear, the richest gene pool of humanity. The mother lode, you might say.

It is this stew of things that strikes me in the ten days we have been here. Much has changed. The streets and roads are cleaner. Buildings are in better repair. Many shacks have been replaced with concrete houses and porta-potties. Smart phones are ubiquitous. The students at university as well as the congregations we know have gradually become the rainbow of people that Archbishop Tutu dreamed of 20 years ago.  And some things are the same. The ANC seems caught in the comradeship of spoils earned by the suffering of those who fought for liberation. And in the path of “rule” comes corruption, in spite of those who seek to uphold the original vision of the Freedom Charter and a new, vibrant democracy. In the face of this the press and civil sphere is vigorous and boisterous. The Democratic Alliance has also become more of a rainbow in the face of ANC corruption or incompetence and now threatens to become the urban party of economic development versus a stagnant ruralism of the party chiefs of the ANC under Jacob Zuma, who is reportedly looking for a fifth wife.
But the country inches ahead with its proverbial humor and stoic perseverance. I am amazed at the success of the South African flag. More ubiquitous and more genuinely popular, I think, than the American flag. Its colors adorn everything from sporting paraphernalia to clothing, cars, and buildings. It is the sheer success of its colors, for it has no medallions, stars, and political symbolism of federation and union. It is itself in its color and design. Everyone recognizes it instantly. Everyone embraces it. An amazing symbolic success. There is a rich irony in that it was designed by an advertising firm! But then I always love the quirky humor of South African adverts (the Brit term).
To check in on popular culture we watch Isidingo, the long-running South African soap opera. To handle the varieties of accents and lingo, it runs with English sub-titles. With a sub-text of social conflicts (it takes place in a gold mine town), it weaves in the perennial sexual tensions, criminal excess, greed, and daily altruism that propels much of our lives. There’s more gloss and sex now. Less overt social conflict. Dailiness has overtaken revolution.
In the real world, the class conflict remains. World platinum demand is down. South Africa is still one of the world’s key mineral exporters. So businesses, especially Anglo-American, retrench, workers strike, the government tries to placate both. People are killed. Just as Americans are still processing the massacre at Newtown, South Africans are trying to find their way from the massacre of workers at Marikana. With the US, we face a politics subservient to the ravings of the gun lobby. With South Africans, it is a much more complex challenge of diversifying the economy and broadening its benefits. It’s a long slow journey to a deeper freedom.
In the midst of this interpenetration of worlds I will be taking a week-long seminar on Homer’s Iliad at the Summer School of the University of Cape Town (had to remind you that’s it’s summer here….). Richard Whitaker, a retired classics prof here has translated the Iliad into a South African context. I think its a marvelous job. There is more in common between the warriors of Homer’s day and the warriors (impis) and lords (nkosi) of Shaka Zulu than with the soldiers and kings of our own North Atlantic cultures. I encountered much of this linguistic terrain in researching and writing Red Clay, Blood River. It will be intriguing to encounter it again from the perspective of the poetic writing that has come to dominate my work.
I hope that this will sharpen my awareness of poetry (especially the demands of meter), translation, and intercultural communication. The Iliad is about men doing battle over the possession of women and riches as well as earning immortality in people’s praise. I think one reason we go back to this primordial text is to try to figure out how we move from a world of heroic combat  into a life where we have to learn to share and sustain the earth in friendship, not only between cultures but between men and women. I’ll report on this exploration in my next posting
This entry was posted in On Writing, Personal Events, Red Clay Blood River, Travel Journal and tagged Cape Town, Homer's Iliad. Bookmark the permalink.

3 Responses to Zebras, Robots, and Homer